Appreciating China To Its Fullest

By Jeremy Martin – Published in Uncategorized, on March 13, 2012

If you didn't have a chance to see the clash of the titans that took place at the VRIC 12 between Gordon Chang & Frank Holmes then view the debate here. Nearly two months later the bull and bear remain grounded offering continued reasoning behind their cases.

While Frank Holmes discusses; Appreciating China To It's Fullest

Wine expert and social media guru Gary Vaynerchuk attributes his ability to detect subtleties in wine that others might not recognize because of his unique taste-testing as a teen. Because drinking wine was illegal, he says he tasted the flavors associated with wine instead. He not only ate fruits and vegetables, but also chewed on chunks of grass, dirt, tobacco and wood so he could learn to recognize the complex flavors that wine has to offer.

For investors, an appreciation of China requires a similar comprehensive analysis.

One significant subtlety that seems to be overlooked by investors today is China’s macro policy strategy. Professor Stephen Roach in the Financial Times thinks the country has been "doing a far better job in managing its economy than most give it credit." Its actions have been deliberate and purposeful, and, most important, successful. He points to measures that China enacted to lower food inflation, along with the numerous times the country raised required reserve ratios and policy interest rates as illustrations of China’s increasing “prowess” in stabilizing its economy.

The positive results of the government’s actions have a delayed effect, only to be detected a few months later. For example, the chart below shows how the food and non-food consumer price index (CPI) have declined on a year-over-year basis over the past several months. CPI is now at its lowest level since July 2010, says CLSA.

With inflation now under control, China is stocked with other possible monetary policy actions to help growth in 2012, as opposed to the central banks of the U.S., Europe and England, which have run empty. “They have followed the Bank of Japan and taken their short-term policy rates down to the zero bound,” Roach says.

Perhaps the sommeliers have become the students: Rather than the developed countries’ central banks providing directives to China on ways to grow its economy, maybe it should be the other way around. Roach says that China “offers some lessons in macro policy strategy that the rest of the world should heed.”

Roach concludes that “long focused on stability, [China] is more than willing to accept the short-term costs of a growth sacrifice to keep its development strategy on track.”

Jim Rogers has also identified many attractive nuances of China, which he believes China Bears are missing. When the legendary international investor was interviewed last week by Business Insider, he pointed to the country’s long history of “entrepreneurship [and] capitalism, they have the brains, they have the know-how” as reasons to be bullish. 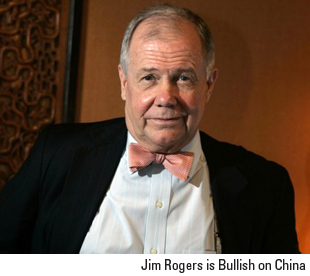 Its likely China will experience setbacks as it grows, says Rogers. After centuries of decline, the country just recently experienced a rebirth when Deng Xiaoping led China toward a market economy in 1978. Growth is still in its early stages. However, each time China data appears slightly off, bears are quick to doubt Beijing’s ability to successfully navigate its economic terrain.

When Premier Wen Jiabao announced this week that the government’s targeted GDP growth was expected to be 7.5 percent, it wasn’t a surprise to seasoned China followers. Andy Rothman of CLSA says it was consistent with his expectations. Premier Wen’s message came as “neither a surprise nor a signal that the Communist Party believes growth is decelerating beyond what we had expected.” Rothman also doesn’t think Wen’s speech signaled additional stimulus either.

Sometimes a target is just a target: China’s GDP has always grown more than what was projected. Take a look at the chart below. The yellow line shows how China has conservatively set its target GDP growth for the past decade. Every year, actual GDP growth has been higher and much higher in some cases. For example, in 2007, while the government projected GDP to grow 8 percent, actual GDP growth came in much higher at 14 percent.

While most analysts don’t expect another moon shot rise in GDP this year, a 7.5 percent growth rate still exceeds most emerging economies and all developed nations. Advanced economy growth is expected to be meager, slowing from 1.6 percent to 1.3 percent in 2012, according to The Conference Board.

Since the new year, the MSCI China Index has risen about 11 percent. This increase comes after a 2011 decline of nearly 20 percent. However, last year’s sell off continues to provide bargain basement prices for some Chinese stocks, as the index is trading at an attractive price-to-earnings level, says Deutsche Bank. While the 10-year P/E has averaged 12.5 times, the 12-month forward price-to-earnings for the MSCI China index is currently at 9.1 times.

Deutsche Bank strategists say with “very healthy” GDP growth and moderate inflation, the “macro fundamentals should easily justify a further rerating of the forward P/E to 10.5 times” by the end of 2012. This valuation suggests that the MSCI China could increase 15 percent from its March 8 level, says Deutsche Bank.

For long-term investors learning to appreciate the finer points of the country, we believe China is somewhat like fine wine; it only gets better with age.

The Consumer Price Index (CPI) is one of the most widely recognized price measures for tracking the price of a market basket of goods and services purchased by individuals. The weights of components are based on consumer spending patterns.